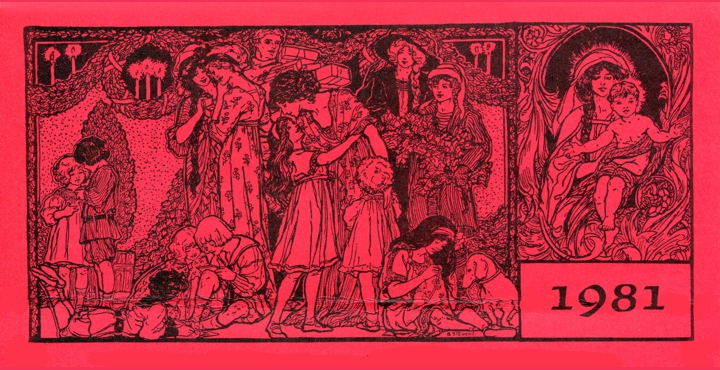 CHRISTMAS 1981 – is almost upon us — what beautiful memories of Christmases past we hold so dear.

“We’re making a Gingerbread Man, Grandma, and lots of cookies too….and for my happy birthday Mommy bought me a cake decoration with a honey bee, a bee comb and flowers, too.” Yes, Dena Marie Van Schaack will be three just after she celebrates her second Christmas. Mommy Linda says, “Dena has been singing ‘Happy Birthday to me’ as she helps bake bread and cookies, sets the table and even while she’s playing.” Dena loves to color and with a wee bit of help she’s writing her name. A beautiful child with a marvelous disposition, says Grandma Joyce.

It was just last July when Dena’s Grandpa Jim and Grandma Joyce were visiting in Telluride, Colorado. They spoiled Dena just as much as possible — enough to last ’til the next visit. The Van Schaacks all enjoyed friends, romped in the forest greenery — yes, it was heavenly and relaxing in the Colorado Rockies. The hospitality was fantastic as Linda cooked and baked, washed clothes and still had time to take long walks with her in-laws and Lee, Dena and springer spaniels, Marcy and Patty. During the school season, Linda is a teacher’s aid at their church school; she is also busy with cooking, cleaning and canning. Lee and Linda both enjoyed attending Chris-tian Retreats. Lee has worked very hard building a hunting lodge and an A-frame house, as well as remodeling homes. He’s planning to build antique furniture reproductions. Although he made no catches, Lee enjoyed deer and elk hunting this season.

“Zoom, zoom,” Adam Michael Stamos is frequently heard saying — Papa Jim says Adam, now 2 1/2 years old, never misses a plane flying overhead. In October Papa Jim, Mom-moma and Uncle Chris visited the Stamos’s home in Santa Cruz. They were delighted to be invited to the International Air Show in Salinas as Tom treated with box seats. It was great for all until the Blue Angels took off and Adam took Mom-moma’s hands and firmly covered his ears. “Too noisy!” he exclaimed and promptly took a nap on Mom-moma’s lap with his ears covered. That night the family watched the news about the airshow on TV, and Adam jumped up and in only his style flew all around the room. A couple of weeks earlier he jumped off his toy box and ended up with a broken nose. He’s still playing superman though! He’s busy three days a week at nursery school and loves it. He also loves to go to the Boardwalk and ride the Merry-Go-Round, the tiny airplanes and cars. Adam loves to put puzzles together and surprises everyone at his abundance of talents and energy.

Tom has advanced in his insurance endeavors. He changed agencies in 1981 and is now commuting to San Jose. He !s still piloting in his spare time, as well as completing additions to their home. He even found a bark-less pet for Adam — a darling rabbit. Dana enjoyed helping a Christian friend start a new radio show during 1981. She takes exercise classes, is a gourmet health food cook, is involved with a new program for an advertising agency — as well as caring for Tom and Adam and their pet.

Chris complete his A.A. Degree with honors, worked full time in construction and hopes to get his Contractor’s License soon. He’s 21 now and purchased a second vehicle –a Toyota pick-up truck. Mom and Dad are very proud of him. If they build in Santa Barbara next year, Chris will no doubt be the Supervisor. He’s a great writer; just call his Mom to hear all his great English papers! He’s getting to be a good cook as he and Dad have had lots of practice this year. His museum is still growing.

Jim redesigned an 1890 building in Fresno; soon an interesting interior will magically appear. He’s been helping out at the California Republican Party with design and lay-out work. In January he will be teaching at the Art Center School — advanced design. Mom teaches at Los Angeles Mission College two nights a week and is organizing the new California Republican Hispanic Council statewide and loves it. Jim’s Mom and Dad are fine. Joyce lost her sister LuWanna and her Dad in 1981. They are at peace, but missed so much by those left behind.

We love you, our dear relatives and friends. We wish each of you a very, very MERRY CHRISTMAS.

Joyce Van Schaack was born in 1930 in Indiana. She moved to Los Angeles where she met Jim Van Schaack in high school. They married and raised 3 children, Lee, Dana and Chris. Joyce went back to school graduating with a Masters of Arts in Secondary Education from California State University Northridge in January 1977. She also worked in politics for President Ronald and Nancy Reagan, and the Bush Presidents.